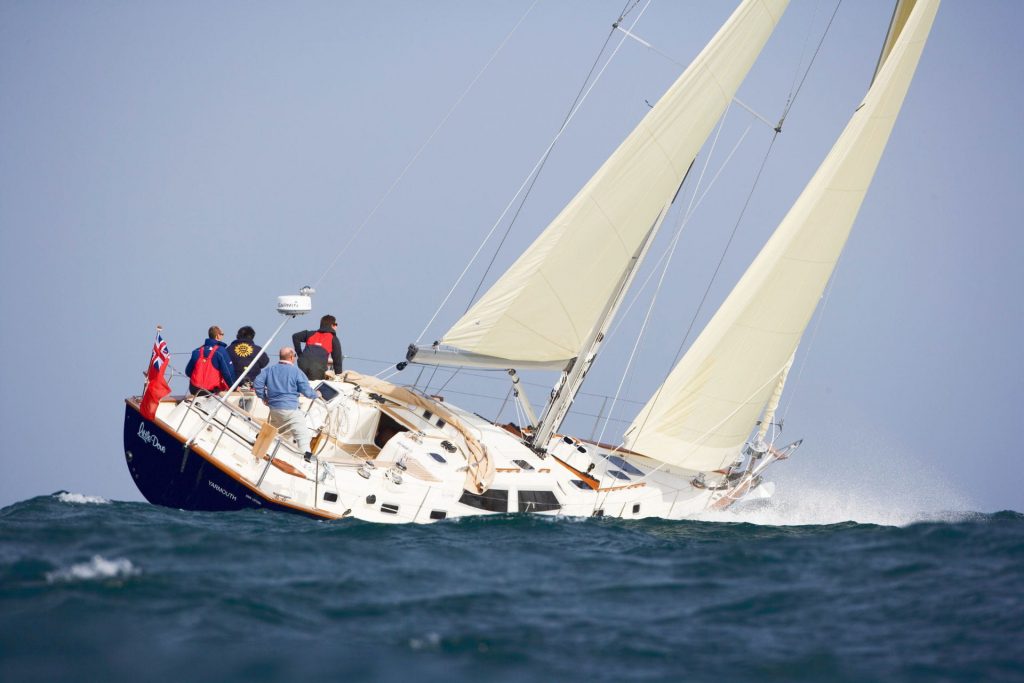 When you know your draught (or draft) from your displacement and that the length overall is not the overall length of the yacht including pulpits and bowsprits, you can start using these figures to help you make an informed decision. If you’re unsure of these terms, we explain them here. These are the key figures you’ll need to compare the stability and sail power of one yacht with another. But before you start plugging numbers into online calculators (of which there are many) or working out your own calculations, it’s important to work either all in imperial units or all in metric. Don’t try mixing and matching, that is a path to confusion and head-scratching. If you’re looking for an online calculator, this is our favourite.

This is often included in yacht specs (for monohulls only) as a guide to a yacht’s stability, but it’s often a red herring. It’s more accurately called the ballast/displacement ratio and it’s usually given as a percentage, which tells you how much of the yacht’s total displacement is ballast.

The higher the figure, the ‘stiffer’ (more stable) the yacht is reckoned to be. A ballast ratio of 50% is about the upper limit of a very stiff boat, 35% is average and 25% is regarded as tender (less stable) and assumed to be unsuitable for ocean voyaging.

The big problem with the ballast ratio, however, is that it can only be used to compare boats with similar hull shapes and similar keel types. It doesn’t take into account the position of the ballast, so comparing the ballast ratios of a yacht with a triangular keel and one with a bulb of ballast at the bottom of a deep fin, for example, will be misleading. The keels of our Rustler 33 and 44 are flared at the bottom, putting more of the ballast down low where it’s most effective. They both have high ballast ratios anyway, but if the keel shape were taken into account, the figures would be even higher.

Let’s take two identical yachts and fit a heavier shallow keel option on one and a lighter deep keel on the other, so that both yachts have the same righting moment. The shallow-keeled yacht will have a higher ballast ratio so would be perceived to be stiffer when, in fact, both yachts have exactly the same stability.

There are many types of yacht, from ultra-light racers to coastal cruisers with moderate displacement and heavy-displacement ocean cruisers. How do we know how which is which? An IMOCA 60 might weigh 9,000kg, which is more than a Rustler 37 at 8,845kg, but the IMOCA has very light displacement for its size and the Rustler is classed as heavy displacement. The key to this is the displacement/length (D/L) ratio.

Generally speaking, heavy displacement tends to give a more comfortable ride in rough seas, as the yacht tends to go through the tops of waves rather than over them. It should also improve the yacht’s load-carrying ability – its performance and handling will be less affected by adding extra weight. On the other hand, a light displacement hull has less wetted surface area, hence less drag, and better acceleration. Experienced ocean cruising sailors tend to choose heavy displacement boats but like most things in sailing, finding the sweet spot between the two extremes is a matter of personal preference.

So her light ship SA/D is 318 and it increases to 329 at normal sailing displacement.

The result should come out somewhere between 10 and 20. About 15 to 18 is ideal for ocean cruising. Boats with SA/D around 12 and below can be considered underpowered – you’ll often be reaching for the engine start button. Those with 20 and above are racing yachts. You wouldn’t want more than 18 or so for an offshore cruiser because you’d need to be constantly trimming, tweaking and reefing on passage.

The SA/D ratio is a useful indicator but there’s one thing you must be aware of. It’s traditionally (and still often) calculated using the area of the mainsail and the area of the foretriangle, regardless of the type of headsail (both sails in the case of a cutter) that’s actually supplied with the boat. Unless all the yachts you’re looking at have 100% jibs, you will need to ask the builders or dealers how their SA/D figures have been calculated or calculate them yourself by multiplying the I (height of the foretriangle) and J (foretriangle base) and dividing the answer by two. For example, if you were to work out the total sail area for a Rustler 57 using her foretriangle area (1,733ftsq), rather than the actual areas of her overlapping yankee and staysail (2,228ftsq), the SA/D ratio would be a reassuring 18, and not the overly generous 23.3.

SA/D can also give an indication of the impact adding extra people and kit on a yacht. Adding 450kg (992 lb) of crew and kitbags to a light displacement boat will have a greater effect than it would adding it to a Rustler 42. This will be shown by a larger drop in the ratio for the lightweight boat than for the Rustler.

Just as adding weight can decrease the ratio, increasing the sail area can increase it. Adding a staysail and yankee, a large overlapping genoa or a code zero will increase the SA/D ratio. It’s important to compare yachts with the same load state and equivalent sails.

Don’t take it as gospel

These dimensions, measurements and ratios can be useful indicators but that’s all they are. They are specific to the design, not an individual boat. A yacht with the right figures in her specs could still be awful to sail, awkward to manoeuvre, hard to handle, badly rigged, roughly finished or poorly built.

Weight distribution has a major influence on a boat’s performance, handling and seakeeping but it’s not considered in any of the ratios. Loading up a yacht with heavy options and extras will always have an effect, especially if they’re fitted high up or near the bow or stern. Likewise, choosing a carbon mast over an aluminium mast will improve the performance and comfort, but won’t be reflected in any of these ratios.

Learn more about the benefits of carbon rigs

There are some indicators that are quite commonly used, which we haven’t included in this article even though they tend to work out favourably for Rustler yachts. STIX and G/Z curves, for example, are misleading if weight distribution is variable – which it usually is. Likewise the widely used Comfort Index – the naval architect Ted Brewer originally proposed it mainly as a joke.

The bottom line is that there’s no substitute for real experience. Use the specs and ratios to create a shortlist but then get on board at boat shows, arrange for a test sail and judge for yourself.

What other hull features will benefit you on a cruising yacht?

We use cookies on our website to give you the most relevant experience by remembering your preferences and repeat visits. By clicking “Accept All”, you consent to the use of ALL the cookies. However, you may visit "Cookie Settings" to provide a controlled consent.
Cookie SettingsAccept All
Manage consent

This website uses cookies to improve your experience while you navigate through the website. Out of these, the cookies that are categorized as necessary are stored on your browser as they are essential for the working of basic functionalities of the website. We also use third-party cookies that help us analyze and understand how you use this website. These cookies will be stored in your browser only with your consent. You also have the option to opt-out of these cookies. But opting out of some of these cookies may affect your browsing experience.
Necessary Always Enabled
Necessary cookies are absolutely essential for the website to function properly. These cookies ensure basic functionalities and security features of the website, anonymously.
Functional
Functional cookies help to perform certain functionalities like sharing the content of the website on social media platforms, collect feedbacks, and other third-party features.
Performance
Performance cookies are used to understand and analyze the key performance indexes of the website which helps in delivering a better user experience for the visitors.
Analytics
Analytical cookies are used to understand how visitors interact with the website. These cookies help provide information on metrics the number of visitors, bounce rate, traffic source, etc.
Advertisement
Advertisement cookies are used to provide visitors with relevant ads and marketing campaigns. These cookies track visitors across websites and collect information to provide customized ads.
Others
Other uncategorized cookies are those that are being analyzed and have not been classified into a category as yet.
Non-necessary
SAVE & ACCEPT
Powered by