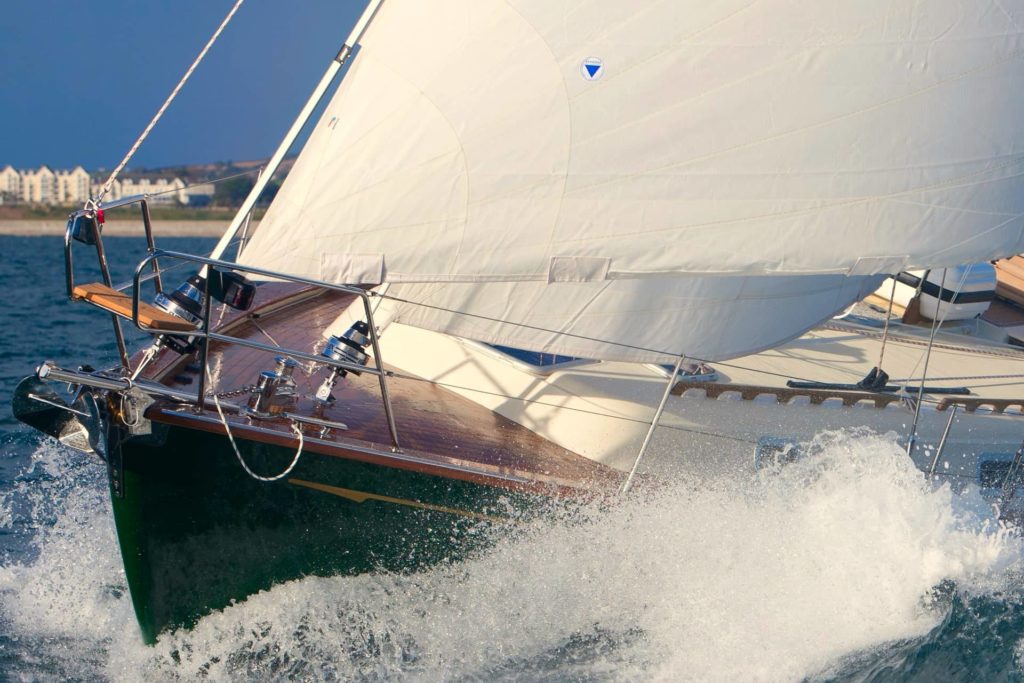 If you’re new to Rustler’s range of offshore and ocean cruising yachts you may wonder why they have two headsails in the foretriangle – two sails in front of the mast – where most cruising sailboats only have one. Two headsails might take a few more seconds to trim than a single one, but two smaller sails are more manageable than one big sail – and we’re not just talking about taking them off the boat at the end of the season.

If you think about carrying bags of groceries, it’s often easier to carry two smaller bags that are half the weight of one big bag. The double headsail arrangement we use is a cutter rig, and it’s the standard option on our ocean cruising boats because, on balance, it gives you the best offshore sailplan.

If cutter rigs are so good for offshore sailing, why don’t more yachts have them? There are various reasons.

Many yachts nowadays aren’t designed for serious offshore use, and to enlarge the saloon accommodation many builders have moved the mast (and the load-bearing bulkheads, in the case of a deck-stepped mast) quite a long way forward. This makes the boat’s foretriangle narrow and tall, which doesn’t suit a cutter rig. It also creates an unbalanced sailplan, which is why most modern racing yachts (like our cruising Rustlers) have their mast further aft to give a larger foretriangle.

For a cutter to work efficiently, the base of its foretriangle needs to be a minimum of around 4.25m (14ft). The deck must be strongly reinforced, and it may need some supporting structure beneath it, to take the loads from the inner forestay. Many builders don’t offer a cutter-rigged option because it costs them more to build and it interferes with their interior designer’s ideas.

There’s a common misconception among less experienced sailors that a single-headsail rig is inherently much easier to sail. This is nonsense, though it is often mentioned by sloop yacht salesmen; if you can trim one headsail you can just as easily trim two. And it doesn’t mean more work for inshore sailing – when you’re short-tacking a cutter up a narrow channel, for example, you just furl away one of the headsails and use the other.

Cutters do cost more than sloops. You need two forestays, two sails, two furlers and two sets of deck hardware, which puts off the price-conscious buyer. We think your safety and comfort is worth the extra investment, so all of our modern ocean cruisers were designed to be cutters from the outset.

Like two heads, two headsails are better than one and here’s why.

A cutter rig breaks the yacht’s sail area down into smaller, easier to manage sails. Winching in two smaller sails is easier than one big sail, as the loads are lighter. If you’ve ever had to winch in a big overlapping genoa after a bad tack, you’ll know the effort and time involved. You don’t have that with a cutter rig.

We can, and do, fit electric winches but there will be times when you need to conserve power – it’s often the case on an ocean passage – and the cutter rig gives an easy manual back-up as opposed to an awkward one. It’s also handy when your push-button winches stop working. And sometimes you might just want to trim the sails without the noise from the electric winch gearbox.

It’s not just the crew who’ll benefit from the lighter loads, it’s easier on the boat. A cutter rig has more lightly loaded attachment points on the deck and mast – the heads, tacks and sheets of the two headsails are taken to different locations, spreading the loads more evenly.

While some cutters do have huge overlapping genoas, we recommend a yankee instead. This is a high-cut headsail with little or no overlap (often 100% of the foretriangle area or less). A genoa delivers more power than a yankee but in light winds you’ve also got the staysail.

Many Rustler owners wax lyrical about their yankee jibs. The high clew has several advantages: the foot of the sail is raised off the deck so in rough weather there will be less water on deck, either from spray caught by the sail or waves scooped up by its foot. The high foot also gives a much better view forward from the helm, and the sail has less twist which means the sheeting position doesn’t have to be adjusted as often as it would for a genoa when you’re bearing away and sailing further off the wind.

Having a small staysail inside your main headsail gives more options to gradually and evenly reduce sail as the wind increases. First, you put a reef in the mainsail. Next, you take in a few turns on the yankee, then add a second reef to the mainsail before furling away the yankee, leaving a full staysail and double-reefed main. If the weather gets even worse, you put a third reef in the mainsail and then take it down completely, leaving just the staysail.

Another advantage of the cutter rig is that as you reef, you’re bringing the sails’ centre of effort lower down and closer to the boat’s centre of lateral resistance. This means the boat remains balanced on the helm and is more comfortable to sail. If you do need a bit of forward sail area to fine-tune the balance of the sails, you just unroll a few turns of the yankee. Sail balance, of course, is extremely important when you’re sailing offshore with an autopilot.

We’ve talked about balance, the ability to reef gradually and the improved balance that the cutter rig offers. All three of these points come together to make a cutter rig the best option for heavy weather sailing. When it’s time for storm sails, the last place you want to be is on the bow. On a sloop, you’ll have to wrestle down a big genoa or fit an inner forestay and hank on the storm jib. On a cutter, the staysail can be used half-furled as a heavy weather jib. In extreme conditions you might still need a storm jib, but the inner stay is set closer to the mast – a safer place to work than the bow. Also, the staysail is smaller, lighter and a lot easier to manage than a genoa if it needs to be replaced with a storm jib.

As with most things boat-related, all cutter rigs are not equal. To work properly the two forestays should be as close to parallel as possible. The staysail’s triangle base should also be around two thirds of the overall foretriangle as this creates a big enough gap for both headsails to work efficiently, as well as giving the larger, outer headsail enough room to pass through the gap between the two forestays.

We fit running backstays on our cutter rigs. While they can be sailed a lot of the time without runners, in swell and heavy seas the mast benefits from the extra support to stop it panting or flexing from the extra loads of the staysail. Rest assured, we make this easy. The runners can be tamed with tether lines led from the cockpit: just release the tether, take the windward backstay to the spinnaker winch and tighten it up. Unlike a racing yacht, there’s no rush to load up the windward runner as she will happily sail on without them. They do, however, provide extra support and security. When you’re not using the staysail, the runners aren’t needed and the tether lines take them forward to the chainplates where they’ll stay neatly stowed.

We’ve rigged some of our yachts with a convertible sailplan that’s easily to change between cutter and sloop configurations, by setting the staysail on a removable inner forestay. The reason to do this is that on flat water, a cutter can’t point quite as high on the wind as a sloop because the yankee starts to stall the staysail. However, unless the sea state is smooth a sloop can’t point any higher. The removable inner forestay option is worth considering if you’re keen to optimise upwind performance in light airs, for a bit of racing perhaps. The downside is that it’s impractical to have the staysail on a furler – it would need to be hanked on instead.

If you don’t like the idea of a cutter, how about a slutter? (Not as rude as it sounds, and also called a solent rig for marketing reasons.) A slutter is a cross between a sloop and a cutter with two large headsails, one forward of the other, close together on the bow. It’s a good rig if you want to sail downwind without a spinnaker, as the headsails can be poled out on both sides to give a balanced sailplan with good directional stability. It works well in light airs, too, since it gives you a big furling genoa as well as a high-cut furling yankee (which, strictly speaking, is called a solent jib).

We have rigged Rustlers as slutters but there are some significant drawbacks to consider. Only one headsail can be flown at a time (unless you’re running downwind) and when the inner headsail is deployed, the air arriving at its leading edge has already been disrupted by the furled sail ahead of it, so turbulent air is hitting the sail rather than a clean laminar flow. And when using the outer sail, you need to furl it before you can tack or it won’t go through the narrow gap between the forestays.

There’s also an addition to the cutter rig that delivers most benefits of a slutter without the inherent drawbacks. If a furling code zero is flown from a short bowsprit you get even more sail power up front in light airs, you get a stable twin-pole downwind rig, and you get a clean airflow over your yankee because the code sail is easily lowered and removed when it’s not needed.

If you have any questions about which rig would be best for your style of sailing, get in touch via our contact page and we can discuss the options in greater detail.