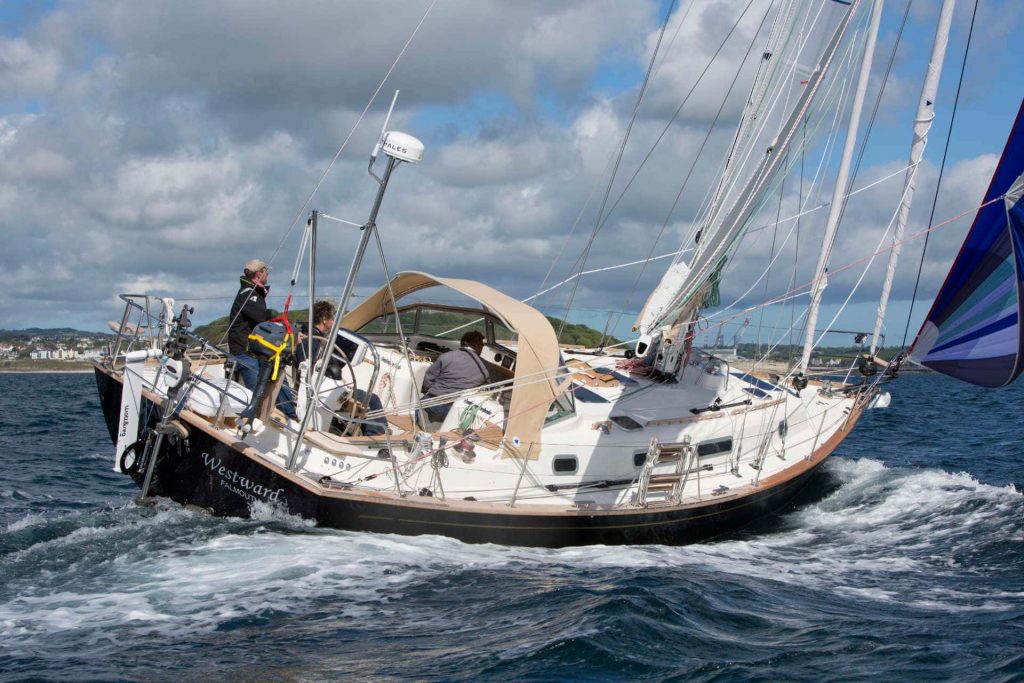 Carbon fibre has long been the material of choice for racing yacht masts. It used to be an exotic material, but it can now be found in many things from pens to pushbikes. Carbon fibre is stiffer and weighs less than other mast materials, but it’s also quite a lot more expensive. So why have we recently had three owners request a carbon fibre mast for their Rustler 42?

Why use carbon fibre for masts?

Most yacht masts are aluminium. The obvious reason for choosing carbon fibre instead is to save weight. Reducing the sailboat’s overall displacement weight is a worthwhile advantage for racers and lightweight performance cruisers, which is why we’ve been offering carbon masts as a performance upgrade for our Rustler 24 and Rustler 33 for quite some time. However, the difference in losing around 25% of the weight of the mast doesn’t make much odds on a medium to heavy displacement boat like our ocean cruising yachts.

What does make a difference, though, is where that weight is saved. Weight on a yacht isn’t necessarily a bad thing when it’s in the right place – it acts as ballast when it’s located amidships and below the yacht’s vertical centre of gravity. It’s not good, however, to have a lot of weight waving around high above the deck. This negatively affects the yacht’s stability, making her more tender (prone to heeling) and it increases her pitching (fore and aft motion) and rolling at sea.

Let’s be clear: having an aluminium mast does not make our boats unstable or uncomfortable. They’re designed to carry that weight, and over many years and ocean crossings they’ve earned an enviable reputation for having a remarkably steady, comfortable motion in rough seas. However, choosing a carbon fibre mast can make even an excellent yacht a little bit better. More stability effectively means more power on some points of sail; less pitching and rolling means less resistance to forward motion and also – important for cruising – less risk of seasickness and a more comfortable ride.

Anyone who has been on a yacht without a mast will know it has a different, somewhat weird, wobbly and jerky motion. What would happen when adding a carbon rig to an ocean cruising Rustler? ‘We started by putting a carbon mast on a Rustler 44,’ Rustler director Adrian Jones explains. ‘I was worried that it might make her fidget on the water, like a boat without a mast. But in fact it has added a knot of speed – the difference has been that remarkable. It also means the owner can leave a bit more sail area up for a bit longer and the boat copes really well.’

‘My co-director Nick was completely against adding a carbon rig,’ Adrian continues. ‘He thought it was a daft idea, but then he sailed that Rustler 44 up to Southampton. He rang me halfway through the trip and said “I’m sold on it!”. The difference was that obvious.’

The next yacht to have a carbon rig was a Rustler 37. That owner sailed his boat to Seattle. Then we put one on the first Rustler 57, which has a lifting keel, partly as a way to optimise her stability with the keel fully raised. The stability calculations for the 57’s RCD (Recreational Craft Directive) certification were done with the assumption that she’d have an aluminium mast, but the carbon mast improves her stability without a doubt. Adrian explains: ‘The weight saving calculation we did, in pictorial terms, was that it saves the weight of a 35hp outboard on the top set of spreaders. When you think about it like that, the obvious question is why would you put all that weight up there?’

At this stage we still hadn’t put a carbon mast on a Rustler 42 – we had a few qualms as it’s such an immensely successful, perfectly balanced sailing boat. ‘I discussed it with Stephen Jones, who designed the 42, to see if he thought we were doing the wrong thing,’ Adrian says. ‘She’s been around for a while and she performs really well, as she was designed to. He said “No, it will be fine” in his usual abrupt but correct kind of way. He’s absolutely right, it works.’

Put simply, the more stable a yacht is, the less she will heel, pitch and roll. Less heel means you can keep more sail area up for longer, so more power and less reefing. Less pitching and rolling means she’s not losing as much energy and speed with her motion, and her crew will have a more comfortable ride. In the case of the Rustler 42, it turns her from an eight-knot boat into a nine-knot boat.

What are the advantages of carbon fibre over aluminium?

Carbon fibre is inherently lighter and stiffer than aluminium, but the ways in which carbon masts are made allow a lot more weight to be saved. A mast has to bear different types and amounts of static and dynamic loads that vary significantly along its length, depending (among other things) on how the mast is supported with stays. Many of these forces are localised: for example a shear force at the foot and sometimes at the deck; torsion, bending and shock loads around the gooseneck, lateral forces in the spreader patches, tension and compression at the hounds (which act as a pivot point on a fractional rig), bending near the top, and so on.

One of the disadvantages of extrusion, the manufacturing process used to make aluminium masts, is that it produces a mast with the same cross sectional size and wall thickness along its entire length. The top part can then be tapered by cutting out a triangular wedge, pushing the cut edges back together and welding them, but that’s about it. The mast manufacturer therefore has to specify the whole mast for the highest load case, even though that force usually acts on just one part of the mast. This means that an aluminium mast is always thicker, stronger and heavier in places than it needs to be.

By contrast, carbon mast construction methods (like the filament winding process used by Seldén who make the masts for most Rustlers and many other sailing yachts) allow the thickness and stiffness of a mast section to be varied and tailored for different loads along its length.

‘The highest loads are usually from the deck to the gooseneck,’ explains Steve Norbury, managing director of Seldén UK. ‘Whatever that load is, the whole aluminium mast has to be exactly the same. With carbon, however, we can vary the thickness of the carbon and change the angle of the fibres where we want to. We might start at the bottom with something that is torsionally strong, then in the middle go for something light, and make the top very longitudinally stiff.’

Every carbon mast from Seldén is individually made. ‘We design a mast for each application and it’s optimised by our design team,’ Norbury says. ‘The laminate thicknesses, the orientation of the fibres, where patching is required [for spreaders and cutter rig attachments], if there’s any UV coating or extra material laid on, it would all be done individually for that boat.’

Carbon masts don’t suffer from fatigue or corrosion (galvanic, pitting or otherwise) and the yield point of the material is greater than aluminium. You can bend a carbon tube further without it failing and windsurfer masts are a great example of this. While carbon doesn’t corrode, the stainless-steel fittings can still suffer from crevice corrosion or pitting as they would on an aluminium mast, so they still have to be inspected regularly.

Aluminium masts can last for 50 years or more, but it’s usually impractical to repair them if they suffer stress cracks or corrode. If a carbon mast is damaged, it can often be quite easily repaired. Just like a fibreglass hull, a skilled shipwright can grind or cut out the damage, laminate new carbon in, fill it, fair it, paint over and you’d never know there had been a problem. They do need occasional maintenance, however. If a carbon mast is clear coated, it must be repainted every eight to ten years to protect it from UV.

The benefits of carbon masts aren’t just for racing yachts. It’s clear from the experience of Rustler owners that they offer real benefits for cruising boats too. So why aren’t they more popular? The simple answer is cost.

Adrian is often asked ‘Are carbon masts any good?’ to which he always replies ‘yes’. Then he’s asked if he would buy one and he says ‘No. Because I couldn’t possibly afford one.’ He continues: ‘While I can’t afford one, our customers can. They aren’t scrabbling around for money and I love the fact that they are interested in making their Rustler perform as well as she can.’