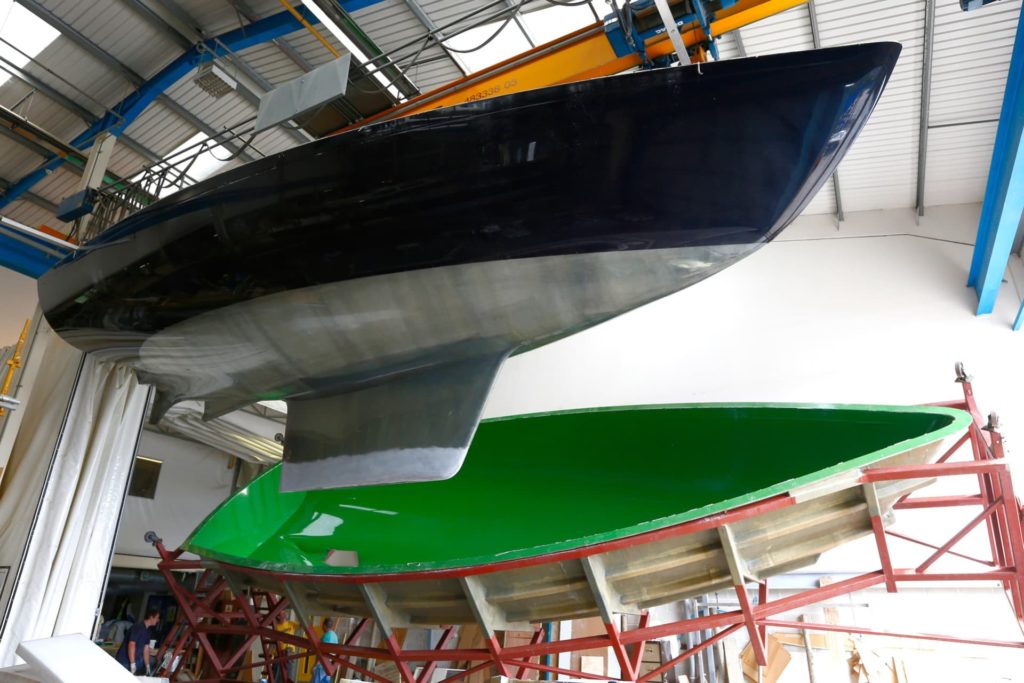 Keel design and ballast can easily be overlooked when choosing a sailing yacht, but having the right keel design for the cruising you do, and having the ballast in the right place can transform your sailing and improve your life on board.

At Rustler, we produce two designs with long keels, one with the option of a lifting keel, and when it comes to fin keels we produce three variants: a standard fin keel, an encapsulated fin, and a stub keel with a bulbed-lead foot over five models. Don’t worry if all those keel descriptions meant nothing, we’re here to explain them, why we have them, and the benefits they bring to our designs and ultimately you, the owner.

Keels come in many different shapes and it’s useful to know some of the technical terms that describe them. The top of a keel, where it joins the hull, is the root. The bottom of the keel, where it hopefully doesn’t hit the sea bed, is the tip. Less obvious, the chord of a keel is its width when you’re looking at the yacht side-on, so a short-chord keel is a deep, skinny fin and a long-chord keel is a shallow one that stretches along the underside of the hull.

The deeper keel, the better, right?

Not necessarily. For a cruising yacht, deep draught can be a liability. In many cruising grounds, from most of Britain to the Baltic, Bahamas and large parts of the Caribbean, shallow draught gives access to a lot more harbours and anchorages. It is, however, correct to say that the deeper the ballast is in or on the keel the better it is for the yacht’s stability.

“For the same volume, lead weighs around 1.4 times more than iron, that’s why we use lead as the ballast on all our yachts”

Keels can be made from many different materials, from cheaper iron to more expensive lead and bronze. For the same volume, lead weighs around 1.4 times more than iron, that’s why we use lead as the ballast on all our yachts. It can be made thinner and therefore less buoyant and the more weight we can get lower down, the stiffer the yacht will be, and the less lead we need; making her lighter and more easily driven in the process.

The right keel for the right boat

We produce two distinct ranges of yachts: dayboats/weekenders and offshore/ocean cruisers. Both ranges are built for different purposes.

Our Rustler 33 is designed for coastal sailing so she’s as nimble and responsive as possible – she’ll tack on a sixpence and then accelerate rapidly out of the tack. For this boat, we use a lead keel bolted to the hull for the best combination of performance and stability. Looking at the keel from the bow, the keel is narrow at the top and flared at the foot. Looking from the side, it’s a deep fin that sweeps aft low down at the trailing edge. This shape increases the amount of lead deeper down as well as reducing drag from the vortices at the keel’s tip. While it’s true that a short-chord fin with a torpedo-shaped bulb on the bottom would put the ballast even lower, it must be remembered she is primarily a coastal cruiser, not a racer. Weed and fishing pots are prevalent in coastal waters and it’s often a real pain to remove flotsam from around the bulb of your keel.

Our Rustler 24 is a dayboat designed to give the same sailing pleasure – a satisfying heft to the helm combined with finger-light balance – that you’ll find on the very best classic yachts, so she has a long keel with a cutaway forefoot. This also prevents her from getting snagged on flotsam, makes her relaxing to sail and gives excellent manoeuvrability under sail at slow speeds, so you can sail her onto a pontoon with ease.

Our offshore cruisers the Rustler 36, Rustler 37 and Rustler 42, have encapsulated keels. This means the keel is moulded as part of the hull. No bolts are holding the keel to the hull, the keel is the hull. It is the strongest and safest way of adding a keel to a yacht. The keel still needs ballast, and for this we use lead that’s moulded to fit at the base of the GRP keel before bonding it in. Using lead in this way on our offshore cruisers gives us more room to fit heavy items lower in the boat. Installing the tankage and the engine low down increases the yacht’s ballast, and lowering the engine also reduces the propeller shaft angle, making it more efficient.

Our Rustler 36 is a classic design with a traditional long keel and a keel-hung rudder, which is still much favoured by short-handed offshore sailors for its rock-solid reliability and because it gives the yacht a comfortable, easy motion in rough seas. Attaching the rudder to the keel makes it far less prone to damage from flotsam and fishing pot lines, but the helm feels heavier as a result. Long keels also give a boat great directional stability, which makes them ideal for windvane self-steering, which contributes to their enduring popularity with long-range ocean cruising sailors.

The long keel does create more drag as more water has to pass over a longer surface area, but as with the Rustler 24, the 36 has a cutaway forefoot which makes her more nimble and responsive than a boat with a full long keel, and if you ever need to sail her onto a pontoon, you’ll find that the same benefit of slow-speed directional stability applies. The main drawback of long-keel boats is that under power, they are more difficult to manoeuvre in reverse.

For the rest of our offshore range, the Rustler 37, Rustler 42, Rustler 44 and Rustler 57, we use long-chord fin keels. These offer an excellent balance between directional stability and performance. The yachts track well and remain comfortable in a choppy sea state, they have good manoeuvrability when needed – without the flightiness of shorter chord fin keels found on many production family cruisers.

A keel design for greater stability

On our Rustler 44 and Rustler 57, we mould the root of the keel into the hull to create a wide, strong GRP fin on the underside of the hull. To this we attach the moulded lead ballast with substantial keel bolts. The Rustler 44 has a raised deck saloon which raises her centre of gravity compared to the Rustler 42.

“The Rustler 44 has a raised deck saloon which raises her centre of gravity compared to the Rustler 42. To overcome this, more lead is needed lower down”

To overcome this, more lead is needed lower down. The GRP fin doesn’t need to be as thick as an encapsulated keel with ballast inside, and the lead foot is bulbed. The other option would have been to increase the yacht’s draught, but we felt this would restrict the harbours and cruising grounds that owners can visit. We use the same solution on our R57, but rather than be needing it to facilitate a deck saloon, it is used to keep her draught below 2.75 m (9ft).

For some popular cruising grounds (like the East Coast of England, Holland and the Bahamas), 2.75m/9ft draught is too much, so we worked with the owner of the first Rustler 57 and the yacht’s designer Stephen Jones to create an innovative solution.

Most lifting keels swing or retract into the hull. They are designed to take the ground so have flat hull sections and twin rudders. The keel box inside can take up a lot of the living space inside the yacht. Not only does it compartmentalise a spacious saloon, it can attract the eye and visually dominate the interior. We wanted to reduce the draught of the 57 to expand her cruising potential – not take the ground – and keep the excellent seakeeping the hull shape offers. We also didn’t want to compromise the interior. Our solution was to have a long-chord keel stub made from lead, wide but relatively shallow.

In the centre of the keel is a bronze fin that has a chord as wide as the depth of the lead stub. When the blade is retracted, the yacht only draws 2.0m / 6ft 8in and she still sails well. With the blade lowered, she has greater stiffness and better upwind performance. We could have chosen a cheaper metal like iron for the blade, but bronze doesn’t rust, making it the best material for the job.

There is, of course, more to keels than ballast. The other job of a keel is to provide lateral resistance – to provide grip in the water and prevent the sideways force of the of the sails from shoving the boat sideways. Like an aerofoil, a well-shaped keel generates lift that counteracts the boat’s leeway when sailing upwind. And the one thing all of our different keels have in common is that they are all designed to provide lots of lateral resistance and generate plenty of lift, so they don’t suffer much leeway. That’s one of the things that makes Rustlers such rewarding boats to sail.

If you have any questions about our keels, or anything specific to Rustler, please contact us. If you have found this interesting, don’t forget to subscribe to our newsletter to bring links to the latest articles to your email inbox.